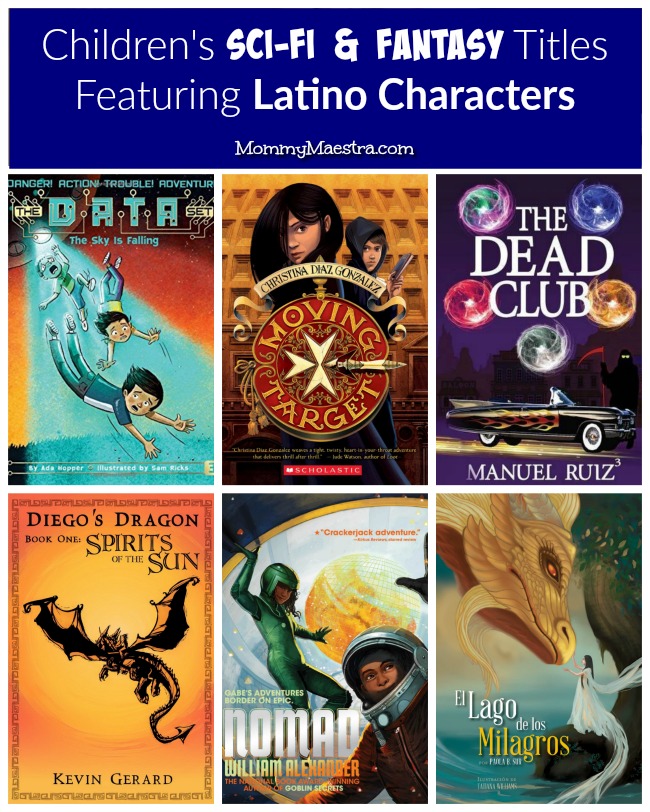 Earlier this month, I shared with you a new Anthology of Latin@ Science Fiction & Fantasy for older teens and adults. Today, I thought I'd put together a list of books or book series for this same genre, but for younger children and teens. Below, you'll find fantastic children's sci-fi and fantasy titles all featuring Latino protagonists, most of them in English, but a few in Spanish, too.  Enjoy!

This post contains affiliate links. Thanks for your support! 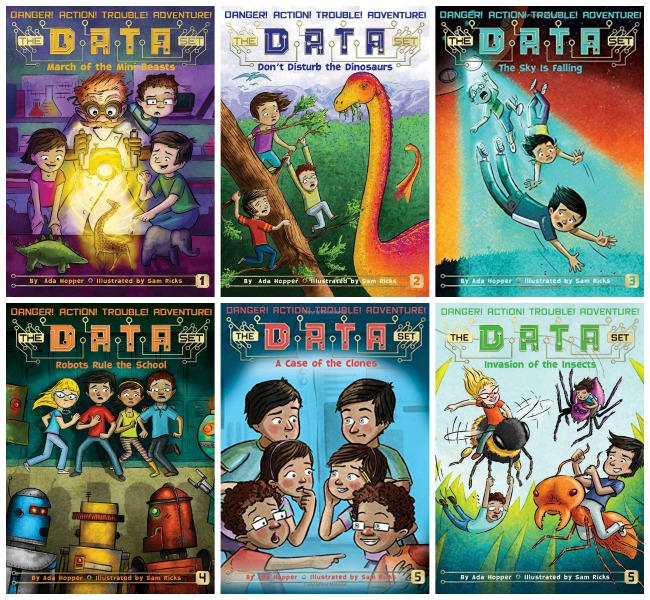 
(For children 8 and older; English only)
Psst! If you love the Magic Tree House series, you'll love this one!

What would happen if your next-door neighbor were a mad scientist?

Gabe, Laura, and Cesar live on a quiet cul-de-sac. They are the whiz kids of Newtonburg Elementary and each specializes in their own subject. In fact, everyone in town lovingly refers to them as the Data Set. However, their quiet days of learning take a sudden turn for the exciting when they meet Dr. Gustav Bunsen—a mad scientist who throws the kids into a wild spiral of adventures.

When Dr. Bunsen’s latest invention, a growth ray, hits several tiny animal toys, the mini beasts don’t just grow, they come to life! The DATA Set love their new tiny pets…until they continue to grow. Now there’s an actual elephant in the room—not to mention a chimp, a giraffe, and a dinosaur. When the beasts wander off, it’s up to the DATA Set to track them down. But will they catch the mini beasts before they grow big enough to start trouble in town?

With easy-to-read language and illustrations on almost every page, The DATA Set chapter books are perfect for beginning readers! 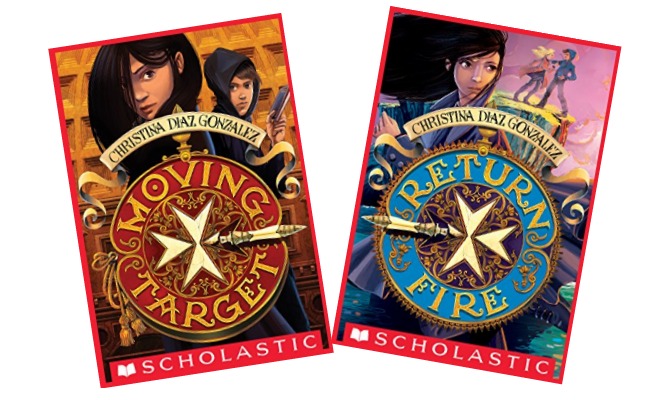 Cassie Arroyo, an American studying in Rome, has her world ripped apart when someone tries to kill her father, an art history professor at an Italian university. Is she their next target?

Cassie sets out to uncover what is happening, only to learn that she is a member of an ancient bloodline that enables her to use the Spear of Destiny--a legendary object that can alter the future. Now running from a secret organization intent on killing those from her bloodline, Cassie must--with the help of some friends--decipher the clues that will lead her to the Spear. 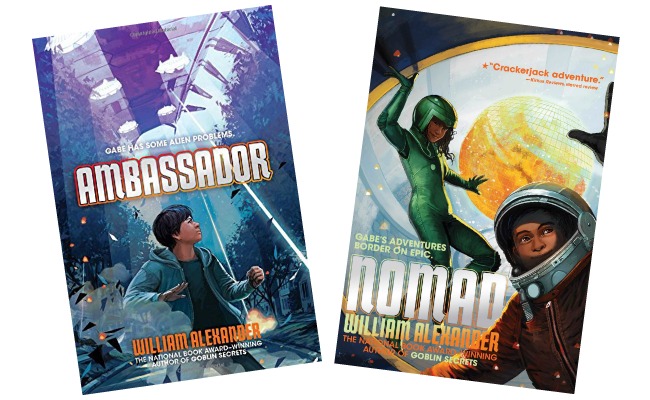 Gabe Fuentes is in for the ride of his life when he becomes Earth’s ambassador to the galaxy in this alien sci-fi adventure from the National Book Award–winning author of Goblin Secrets.

Gabe Fuentes is reading under the covers one summer night when he is interrupted by a creature who looks like a purple sock puppet. The sock puppet introduces himself as the Envoy and asks if Gabe wants to be Earth’s ambassador to the galaxy. What sane eleven-year-old could refuse?

Some ingenious tinkering with the washing machine sends Gabe’s “entangled” self out to the center of the galaxy. There he finds that Earth is in the path of a destructive alien force—and Gabe himself is the target of an assassination plot. Exactly who wants him out of the way? And why?

Back home, Gabe discovers that his undocumented immigrant parents are in danger of being deported. Can Gabe survive long enough to solve two sets of “alien” problems? He runs for his life, through Minneapolis and outer space, in this fast-paced adventure from a National Book Award–winning author. 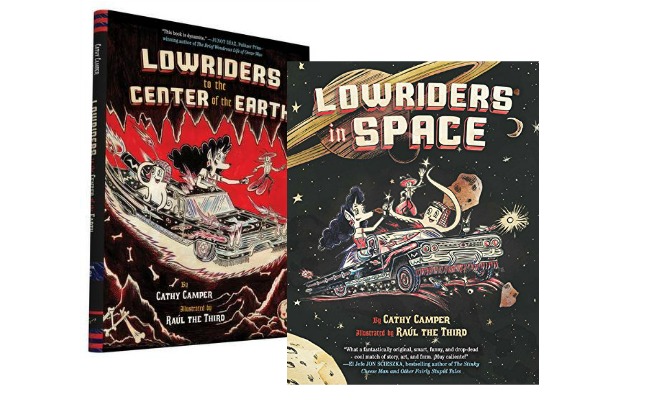 
(For children 8 and older; English/bilingual)

Lupe Impala, El Chavo Flapjack, and Elirio Malaria love working with cars. You name it, they can fix it. But the team's favorite cars of all are lowriders—cars that hip and hop, dip and drop, go low and slow, bajito y suavecito. The stars align when a contest for the best car around offers a prize of a trunkful of cash—just what the team needs to open their own shop! ¡Ay chihuahua! What will it take to transform a junker into the best car in the universe? Striking, unparalleled art from debut illustrator Raul the Third recalls ballpoint-pen-and-Sharpie desk-drawn doodles, while the story is sketched with Spanish, inked with science facts, and colored with true friendship. With a glossary at the back to provide definitions for Spanish and science terms, this delightful book will educate and entertain in equal measure. 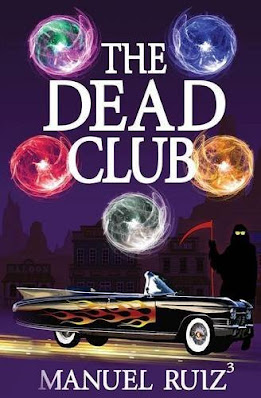 The Dead Club
by Manuel Ruiz

Grey Gomez is an eleven-year-old boy who is having a bizarre week. First he dies, then wakes up in the afterlife with a tomboy, a baseball player, a beauty queen and a science geek. They learn that Purgatory is broken and are soon thrust into a frantic search through the Underworld to find out why. With the help of an Oracle and the Grim Reaper himself, Grey and his new friends develop extraordinary abilities that aid them on their quest to discover the truth. 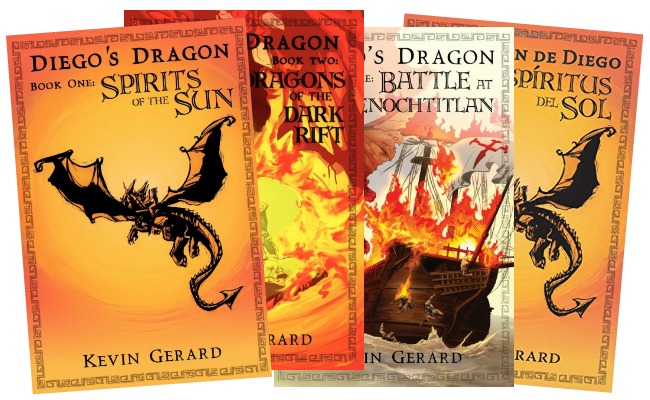 
(For children 8 and older; English or Spanish)

A Boy, A Bloodline, and A Magnificent Journey. An eleven-year-old Latino boy wins a district-wide writing contest for sixth graders. When an author visits his school to award his prize, Diego Ramirez has no idea how much his life is about to change. Nathan Sullivan hands Diego his statue, a handsome, glistening black dragon. He shakes his hand and leaves him to his friends. The students crowd around Diego, asking for permission to hold it. After hearing the name Magnifico spoken aloud by family and friends, Diego awards it to his new dragon. If he only knew how fitting the name was, he might have known what lay ahead. Magnifico is the leader of the Sol Dragones, dragons that live within the magical fires of the sun. Nathan Sullivan is the earth's connection to the mysterious creatures. It is his task to find Magnifico’s guide. As Magnifico comes to life he becomes quite mischievous, playing tricks on Diego to embarrass him. As he discovers his bloodline, however, Diego assumes greater control over his dragon and his destiny. In the climactic journey, he frees his people and suffers a terrible loss by guiding Magnifico to their goal. 
(For tweens and teens; Spanish only)